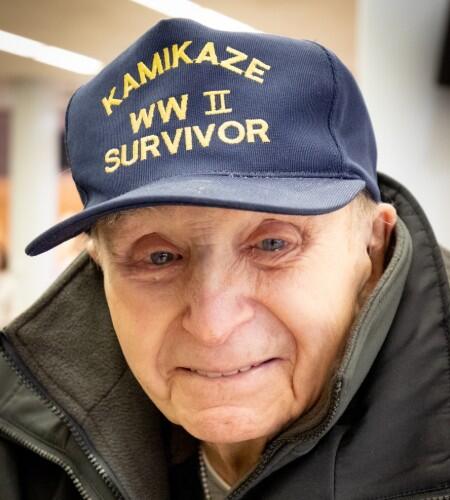 Cincinnati – Charles Hyde, Jr. 95 of Cincinnati passed away 2/29/2020 at the Kenwood by Senior Star after battling Alzheimer’s for several years.

As a Naval Fire Controlman, Third Class, Chick served in the Pacific Theater during WWII on the destroyer, the USS Blue (DD 744). Chick was a Plank Owner, a crewman when the ship was first commissioned.

With his first wife, Jackie, Chick raised his family in Finneytown, while working at GE in Product Support and Sales for 42 years. While at GE, Chick traveled around the world. Retired to Lawrenceburg IN and finally moved back to Cincinnati to the Kenwood by Senior Star. In retirement, he enjoyed running HO scale trains with the Cincinnati Northern Model Railroaders, participating in the Oil Days parade with the Hydetown Volunteer Fire Department in PA, participating in the Great Ohio Bike Adventure (“GOBA”), weekend brunches with his family, attending the Opening Day Parade and Lunken Air Days.

Chick’s love of the outdoors led him to many adventures such as: bicycling across the U.S. at age 70, canoeing down the Zambezi at 74, driving a race car at the Kentucky Speedway and Skydiving at age 80. In his golden years, with his wife Sally (affectionately the two were referred to as “Chicken Salad”) he traveled the US in an RV and enjoyed skiing, riding in a hot air balloon, ziplining, camping and hiking with llamas.

Thank you to the Kenwood by Senior Star Staff and Hospice of Cincinnati for the loving care provided to him.

Map to The Garden of Meditation

Visitation will take place on Saturday, March 7, from 9 am until the time of service at 11 am at:
The Arlington Memorial Gardens Lakeside Mausoleum Chapel
2145 Compton Road
Cincinnati, OH 45231